You get a whole lot of stuff with the base game: 14 plastic zombies and 8 heroes, a modular gameboard 6 L-shaped boards and a center piece , cards Zombie Cards and Hero Cards, divided into basic and advanced versions , 16 dice, a soundtrack, 8 cardboard Character cards, 5 cardboard Game Scenario cards, and a huge pile of cardboard counters and tokens. The quality of the components is pretty good—the heavy character cards are very sturdy and all the tokens and board pieces are made of the same hefty stock. The cards are plastic-coated which makes them pretty durable but they have a tendency to stick to each other and are a bit hard to shuffle.

One of the great things about the game is that they threw in a lot of extras even in the base game: a lot of the counters and tokens aren't even for specific expansions, but they're included so you can make your own scenarios or use them in new scenarios that Flying Frog releases on their website. The soundtrack CD is a fun touch—it's instrumental and can be played as background music. My only complaint there was that it's too short for the game, lasting about half an hour.

They do have a Special Edition soundtrack which is longer and comes with two exclusive cards, but I only found out about that recently. With the modular game boards, various scenarios to choose from, and a random draw of four heroes, there's a lot of variability to make each game a little different. I should note that the game includes six of the L-shaped corner boards but you only use four each time so that's an additional source of variety. There are always four heroes, so you can have one, two or four people playing the heroes. You'll need one or two people controlling the zombies, too, so you can get between two and six people playing depending on how you divide them up.

However, I've found that the zombie players don't really have as much strategizing to do so my gaming group really prefers to have just one zombie player against the heroes. Each scenario has a set number of rounds, marked by a sun tracker, and different goals for each team. Zombies automatically win if they've killed four Heroes or discarded the last card in the Hero Deck, in addition to whatever the scenario goal is. Once everything is set up and everyone is in place, the two teams take turns.


Zombies draw new cards if necessary, roll to see if they'll get to spawn more at the end of the turn, and then move. These are your old-school, shambling zombies and not the speedy sort, so each zombie only moves one space unless special cards come into play. In addition, because of their insatiable zombie hunger, if they're within one space of Heroes they must move towards them.

Any zombies that end up sharing a space with Heroes then fight, which is resolved through die rolls and any cards that either team can play during the fight. During the Hero turn, all four heroes will get to take their actions in any order.

Last Night On Earth | So Say We All

You roll a d6 to move, but you can also give up moving in order to search a building if you're in one, which lets you draw a card from the deck. Some buildings also have special rules for picking out specific cards from the discard pile, which is handy. After moving or searching , you can also exchange items with other Heroes in the same space, shoot ranged weapons like pistols and shotguns.

And then, if there are any zombies left in your space, you fight them. There is a lot of die-rolling involved, so gamers who don't like those might be a little disappointed. Still, there are enough cards that modify die rolls, allow you to re-roll, or even cancel events entirely so you can still work in some strategy. And of course, everyone knows that surviving a zombie apocalypse isn't something you can come up with a perfect strategy for—there's always that element of luck, right?

That's basically it. Heroes can usually take two or three wounds before they die, and there are first aid kits and other ways to heal.

Purchasable with gift card. The Harvest Of Sorrow Last Night On Earth The Beggining Of The Tale A Kind Of Universe Little Treasures Time To Talk 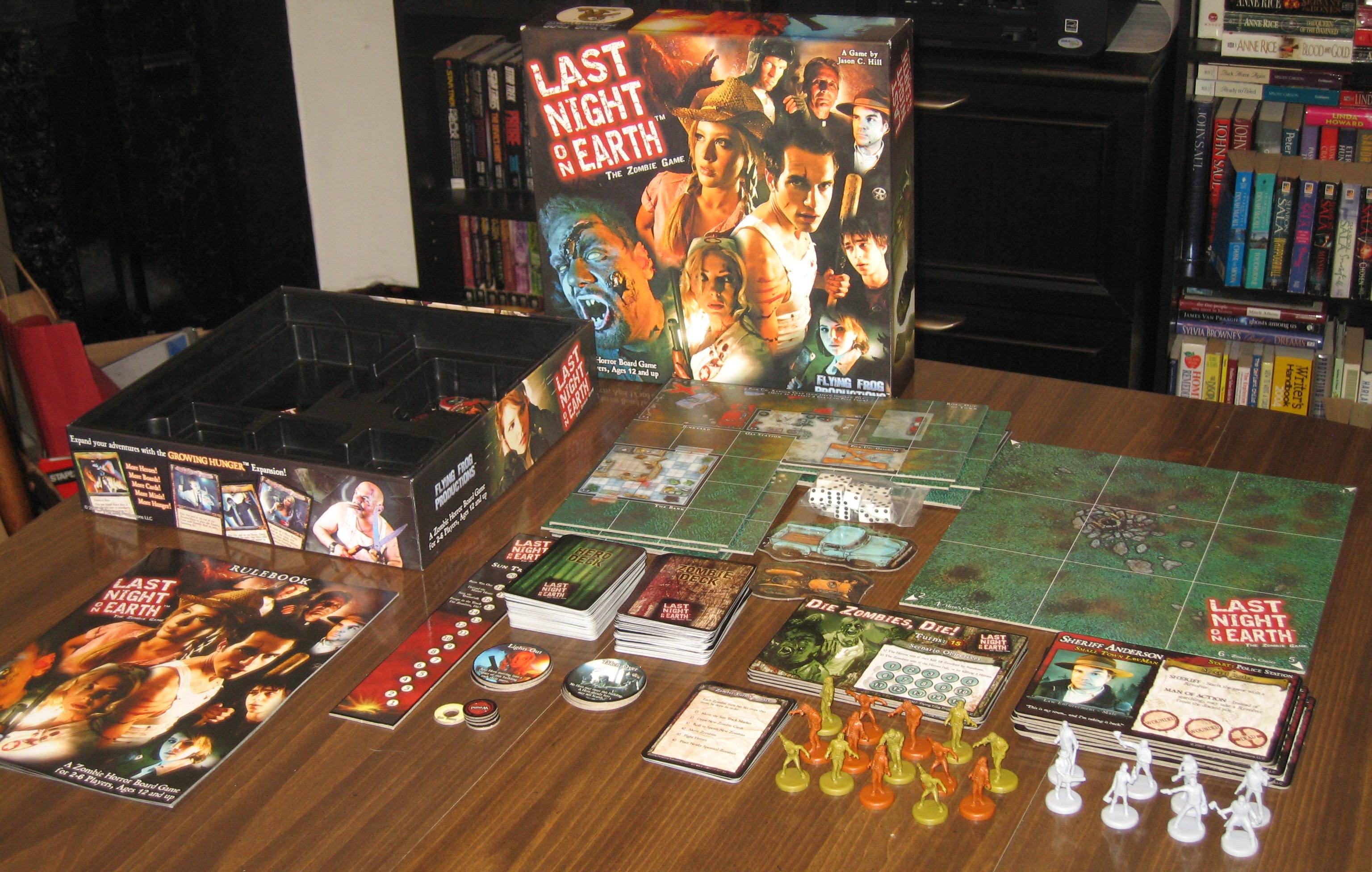